Emphasizing the need for a feminist, people-centered multilateralism that prioritizes human rights and social justice over corporate profit.

When UN Women announced that they were entering a partnership with the asset management firm BlackRock to promote “gender lens investing,” feminist organizations and activists responded with a campaign demanding that UN Women #BlockBlackRock and rescind the partnership.

The campaign’s letter to UN Women, signed by over 700 organizations and individuals, detailed BlackRock’s investments in industries that contribute to climate change and social instability, its terrible track record on labor rights and corporate accountability matters, and its huge investments in fossil fuels and military and civilian arms manufacturing. It points out that BlackRock also holds large amounts of external private debt in Global South countries, and has refused requests from countries to suspend payments during the COVID-19 pandemic.

Our collective Efforts paid off.

On 23 August, we met with UN Women to express our concerns, and they confirmed that the partnership has been canceled. 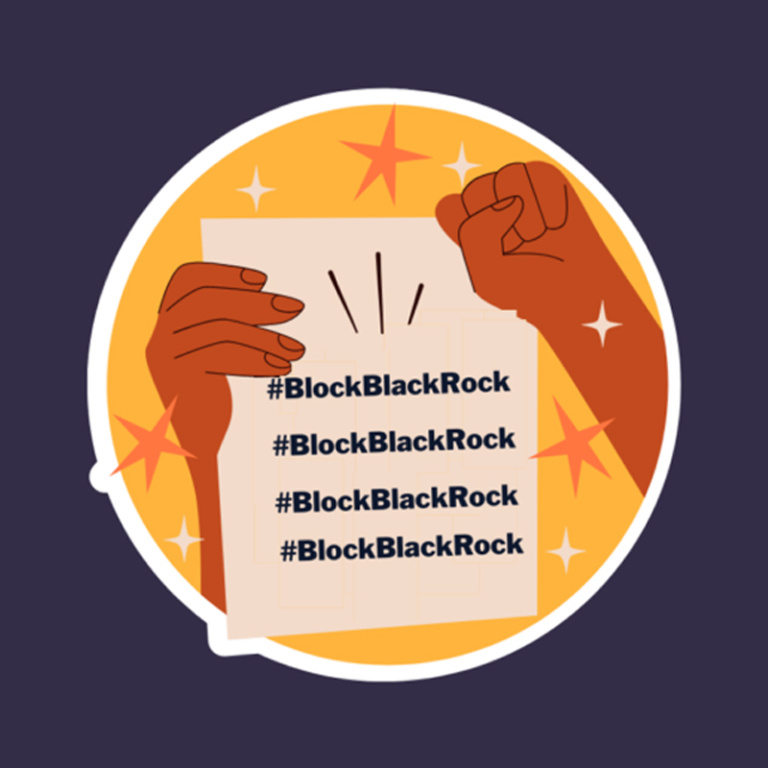 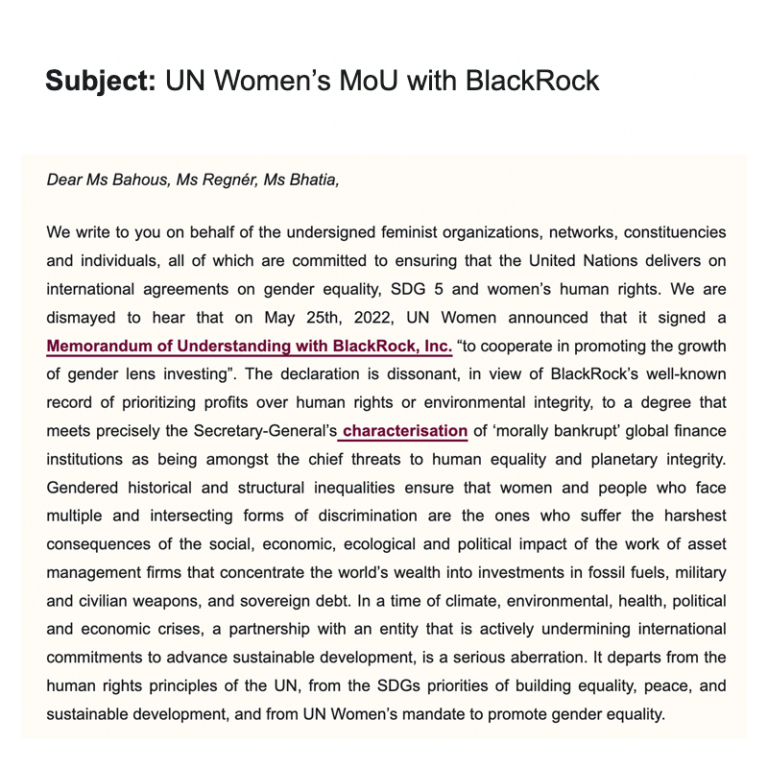 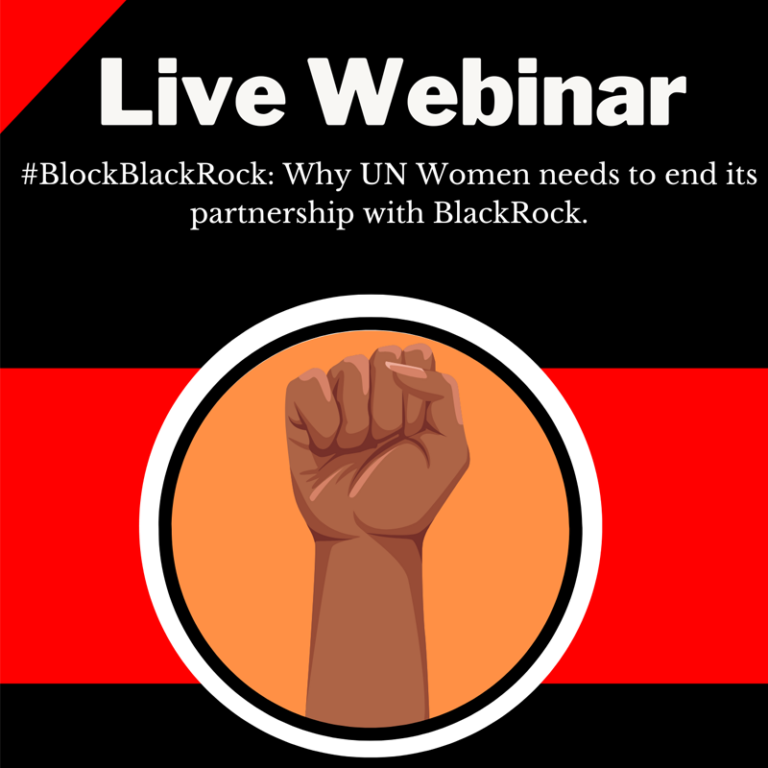 Watch the webinar on why UN Women needs to end its partnership with BlackRock, and learn more about the larger issue of corporate influence (“corporate capture”) within the UN.

As the feminists who co-created the #BlockBlackRock campaign, we are relieved that the partnership with BlackRock has ended.

While we celebrate this win, our fight is not over. 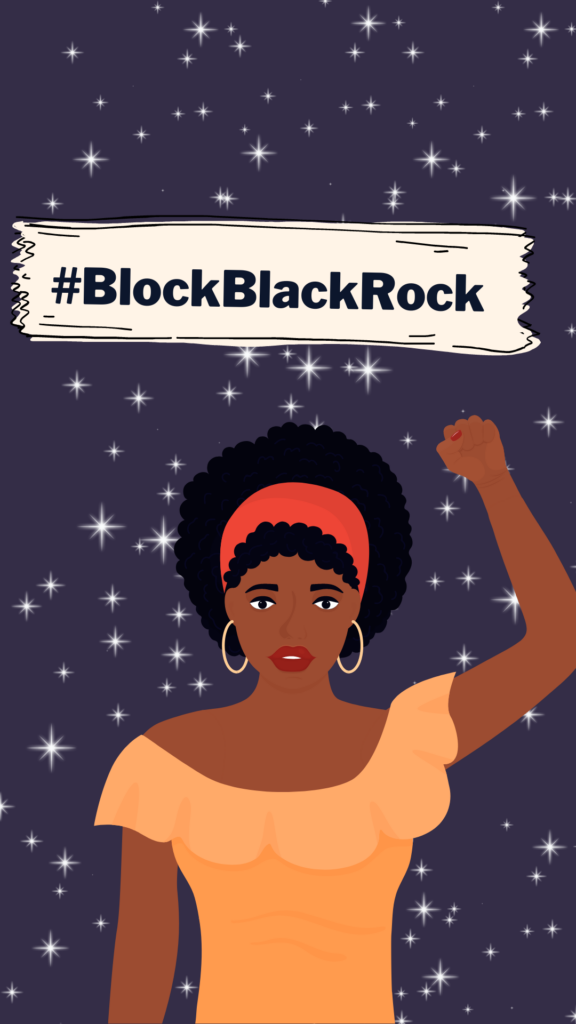 We remain concerned by the absence of a strong and systemic feminist economic justice lens to guide UN Women’s macroeconomic analysis and its approach to private sector partnerships. In the face of overwhelming evidence that shows how our current global economic structures are designed to privilege elite corporate interests over social and environmental justice imperatives; we call on UN Women to share, as a starting point for its private sector strategy, the evidence they have collated that points to corporate collaboration as a more effective strategy than corporate accountability, corporate regulation or of building the collective power of workers—all of which are opposed by corporate interests.

Similarly, we call on UN Women to conduct a robust analysis of their hypothesis that  “gender lens investment” and “gender bonds,” which feature in UN Women’s strategic plan for 2022-2025, can advance gender equality. The BlackRock partnership was intended to “cooperate in promoting the growth of gender lens investing”, yet we have yet to witness transformative changes emerging from gender impact investing or any impacts that warrant existing levels of enthusiasm for this idea among our allies within the UN system.

We are concerned that history continues to repeat itself at UN Women and the broader UN system. There have already been several instances of poorly-conceived private sector partnerships, including a partnership with Uber in 2015 that was also cancelled after a civil society campaign, and this points to a lack of due diligence procedures, including risk assessment and mitigation strategies. In addition to establishing robust procedures, we call on UN Women to initiate a lessons-learned process on private sector partnerships and to ground their private sector strategy in the analysis and experiences of feminist economists, feminist and labour movements.

We remain concerned by the secrecy and opaque manner in which UN Women has handled the Memorandum of Understanding (MoU) with BlackRock. UN Women has refused to share its motivations and objectives for engaging in a partnership with BlackRock, and why this investment firm was considered appropriate for achieving those objectives. We were told that MoUs cannot be made public.  This lack of transparency from a UN institution is disconcerting and contrary to its own calls to “take steps to prevent human rights harms resulting from corporate political engagement”. Secretive MoUs and other types of non-disclosure requirements are practices exported from the world of commerce with a view to protecting competitive advantage. Is this appropriate in the context of the UN’s work and objectives? Moreover, the sheer and phenomenal size of BlackRock’s portfolio – the fact that it surpasses the GDP of many countries put together – makes the notion of a secretive MoU alarming and inappropriate. A secret MoU with such an extremely powerful actor has public interest implications that override any corporate benefit that might accrue to the company from an arrangement with a UN entity.

At a time when movements around the world, like La Via Campesina, No Tech for ICE, Feminists for a Binding Treaty and others are challenging corporate power and the structures that prop up private sector interests, UN Women needs to be a champion of feminist agendas and partner with feminist economists and activists to chart out feminist alternative proposals that center caring economies. As advocates of feminist economic justice, we will continue to monitor and interrogate UN Women’s strategy with the private sector.

Our concerns are not unique to UN Women; as State contributions decrease, we are also alarmed at the ways the UN system is increasingly risking capture by corporate interests. As the UN General Assembly begins its session this month, we emphasize the need for a feminist, people-centered multilateralism that prioritizes human rights and social justice over corporate profit.