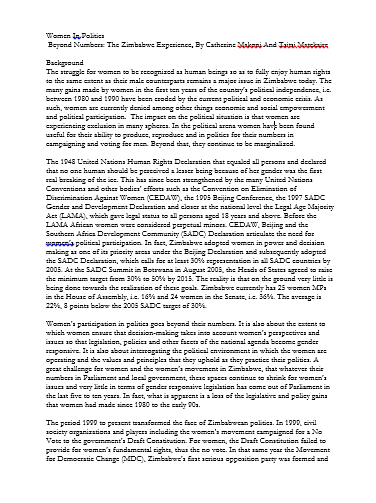 Catherine Makoni and Tsitsi Matekaire of the Women in Politics Support Unit, ActionAid demonstrated the extent to which the current political climate has taken its toll in setting back the many gains women made between 1980 and 1990.

The struggle for women to be recognized as human beings so as to fully enjoy human rights to the same extent as their male counterparts remains a major issue in Zimbabwe today. The many gains made by women in the first ten years of the country’s political independence, i.e. between 1980 and 1990 have been eroded by the current political and economic crisis. As such, women are currently denied among other things economic and social empowerment and political participation.

The impact on the political situation is that women are experiencing exclusion in many spheres. In the political arena women have been found useful for their ability to produce, reproduce and in politics for their numbers in campaigning and voting for men. Beyond that, they continue to be marginalized.