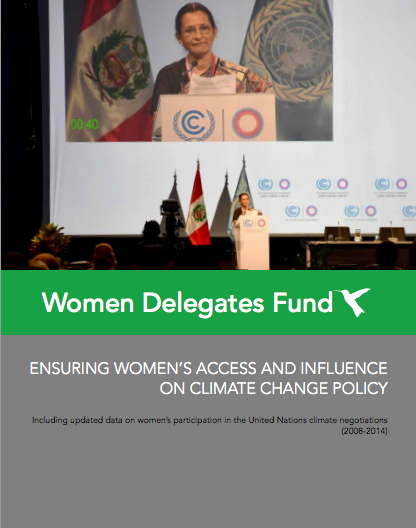 “Ensuring Women’s Access and Influence on Climate Change Policy”, the Women’s Environment & Development Organization (WEDO) illustrates the latest trends in the participation and leadership of women in the UNFCCC climate negotiations.

Although notable progress has been achieved in recent years, women’s participation and influence in the UNFCCC processes has remained limited. In 2014, 36% of participating delegates were women, and 18% of Heads of Delegation were women. Gender imbalances vary across countries and regions. For example, women’s participation in Eastern and Western European delegations averages around 45%, while it remains around 21% in Africa and the Asia-Pacific region.

Since 2009, WEDO has been working, in partnership with the Governments of Finland and Iceland, and the Global Gender and Climate Alliance (GGCA) to support and ensure greater participation and leadership of women in UNFCCC negotiations, particularly from countries most affected by climate change, through the Women Delegates Fund (WDF).

The WDF works to enhance the participation of women in the climate negotiations through travel support, capacity building, networking, and outreach and advocacy. Since its creation 6 years ago, the WDF has supported 42 women from 32 countries at 20 UNFCCC meetings, funding a total of 167 trips.