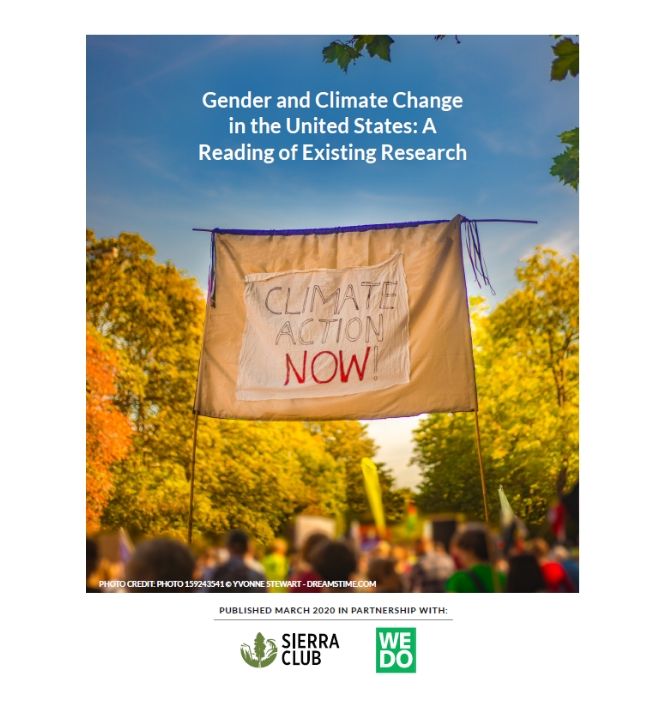 How Research on Gender Will Help Us Craft Climate Justice Policy

How Research on Gender Will Help Us Craft Climate Justice Policy

This blog is also posted on the Sierra Club website.

As the climate crisis accelerates, so does the need to understand its effects and how best to address them. We know that climate change is exacerbating already existing inequalities all across the world — around race, gender and class — and we know that these differentiated experiences with climate change are rarely addressed in policy. The Women’s Environment and Development Organization and the Sierra Club just released a first-of-its kind report that reviews existing academic and scientific literature to further explore the gender-specific climate dynamics in the United States.

With momentum growing for a more comprehensive national climate policy and progressive platforms like a Green New Deal, this report will be critical for ensuring women’s rights and a gender analysis are central to national climate policies. While additional research is needed to more fully understand how different individuals will experience the effects of the climate crisis, especially in considering intersections across race, ability, sexuality, and class, the information collated in this report provides an essential starting place.

So why does gender matter for crafting climate policy? From energy sector employment statistics to health risks to disaster preparedness, gender is a crucial nexus at which climate resilience must be built. If we don’t understand the way gender affects how a person experiences climate change, we can’t build policy to protect and prepare everyone.

Here are five things you didn’t know about climate & gender in the United States:

While this report brings forward important information from existing research, it has also highlighted the need for more research and a deeper analysis of gender and climate in the U.S. context. Much of the research reviewed does not account for the disparities women of different racial identities and people across the gender spectrum experience, both in terms of negative effects, but also around their opportunities for leadership. Illustrative of the importance for further research are limited findings from post-Katrina impacts and recovery of communities of color and queer communities. For instance, following Katrina, women were actually more likely than men to return to the city in the years following the storm (although the gap was not statistically significant). White residents, who tend to have access to more financial resources than Black residents, were significantly more likely to return. What’s more, among Black single mothers, homeowners prior to the storm were significantly more likely to return to their pre-Katrina homes than renters or those in subsidized housing. Also notable is that within the LGBTQI communities of New Orleans, lesbians, bi-sexual women, and queers of color faced greater flooding in their neighborhoods than white middle-class gay men owing to lower incomes and, related, the neighborhoods they could afford to live in pre-Katrina.

As we celebrate Women’s History Month, join us in asking for more research to be done at these intersections. We know that we will not achieve climate justice without gender justice, racial justice, disability justice, immigration justice, and racial justice! How does gender show up in your climate policy advocacy or activism for climate justice?

Mara Dolan: Mara Dolan (she/her) is an Advocacy Associate for the Women’s Environment and Development Organization, where she works on policy research, advocacy, and coalition building among feminist and climate justice movements.

The latest on United States