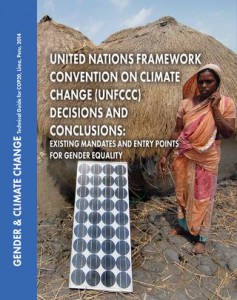 On the road to Lima, what is the status of gender equality in current UNFCCC decisions? (2014)

NEW YORK (October 15, 2014)— As the UNFCCC works towards a new climate agreement at COP21 in Paris next year, WEDO is working alongside many countries championing gender equality as a key element of the new agreement. In addition, Parties and key stakeholders from the Global Gender and Climate Alliance (GGCA) and the Women and Gender Constituency continue to build the foundation for advancing the implementation, monitoring and evaluation of current gender mandates in UNFCCC decisions across all areas of the negotiations.

To support these efforts, WEDO, in partnership with the International Union for the Conservation of Nature (IUCN), and on behalf of the GGCA, is pleased to share a new policy guide for preparation towards December’s COP20 in Peru, outlining all “Existing Mandates and Entry Points for Gender Equality” in current UNFCCC decisions and conclusions.

Available in English and Spanish, and soon in French, this technical guide was developed to support decision-makers, negotiators and advocates in mapping current decisions that contain specific references to gender equality (e.g. in relation to gender balance or gender-sensitive approaches) across all main areas of the negotiations. This mapping further serves to support users in more effectively monitoring the implementation of gender-sensitive climate change policies and actions at all levels.

The compilation highlights a strong foundation for gender-sensitive climate policy, with gender referenced across 32 current decisions related to adaptation, mitigation, technology, finance, capacity building, and loss and damage, as well as current conclusions in agriculture. This includes the often cited Decision 23/CP.18 that established a standing agenda item on gender and climate change at the COP. The upcoming COP20 in Lima, Peru is a pivotal point for the UNFCCC, where Parties have an opportunity to provide the overarching guidance and framework for implementing these gender-related mandates by ensuring:

1) Gender equality is reflected as a guiding principle and cross-cutting element for all actions in the new climate agreement,

2) Progress is made  under the Standing Agenda item on Gender and Climate Change to establish a framework for action to advance implementation of gender-sensitive climate policy.

In addition to a compilation of text, the guide provides an overview analysis of progress and gaps for gender-sensitive climate policy, for example:

The latest on Climate Change, UNFCCC, WEDO at COP20