New York (19 September 2016) – Yesterday, Máxima Acuña, a Peruvian Environmental Defender and 2016 Goldman Prize award winner, and her husband, Jaime, were violently attacked by an alleged hitman of the Yanacocha mining company in northern Peru. According to Acuña’s testimony and GRUFIDES, the NGO which provides her legal support, she was severely hit on the head and body, and her clothes almost torn off; she is currently in emergency treatment. A subsistence farmer in Peru’s northern highlands, Acuña stood up for her right to peacefully live off her own property, a plot of land sought by Newmont and Buenaventura Mining to develop the Conga gold and copper mine, which would threaten to contaminate the water supply for thousands of people. The mining company’s expropriation and violent intimidation of Acuña began in 2011, but her fierce courage and determination led to legal triumph in 2014 and award of the 2016 Goldman Environmental Prize.

“This is not an isolated event. Human rights abuses continue to be perpetrated against environmental human rights defenders with impunity, while governments remain complicit. Who will guarantee the safety of the defenders who protect their lands, and our collective right to a healthy and sustainable planet?” asked Majandra Rodriguez Acha, Peruvian activist and Young Feminist Fellow for Climate Justice at WEDO and FRIDA: The Young Feminist Fund.

On March 3 earlier this year, last year’s winner of the Goldman Environmental Prize, Berta Cáceres, was murdered in her home in La Esperanza, Honduras. Cáceres was an indigenous and environmental rights activist who opposed a large hydroelectric project. In Peru alone, 61 environmental activists were killed in the past decade making the country the fifth most dangerous place to be an environmental activist, according to human rights NGO Global Witness. Everyone has a right to stand up for their environment, and violence against women activists must end. Enough is Enough.

“In was only some months ago that world leaders committed together to halting climate change and keeping warming under 1.5 degrees, and yet too many environmental defenders, who dare to stand up and protect their lands and waters, have been injured or killed, rather than celebrated for their role in the fight to save our planet,” said Bridget Burns, co-Director of WEDO.

WEDO stands in solidarity with Acuña as she continues to defy the mining companies threatening to destroy her home and calls on the Peruvian government to guarantee her safety and health, as well as that of her family. This is in line with the precautionary measure that has been granted to her, which should mean she has police protection, not police aggression. Supporting the call of local movements that say Congo No Va or Conga Will Not Pass, we call on Newmont Mining Company to desist from any further interest in developing or expanding the Yanacocha mine, and therefore, any more suffering on Acuña and her community. 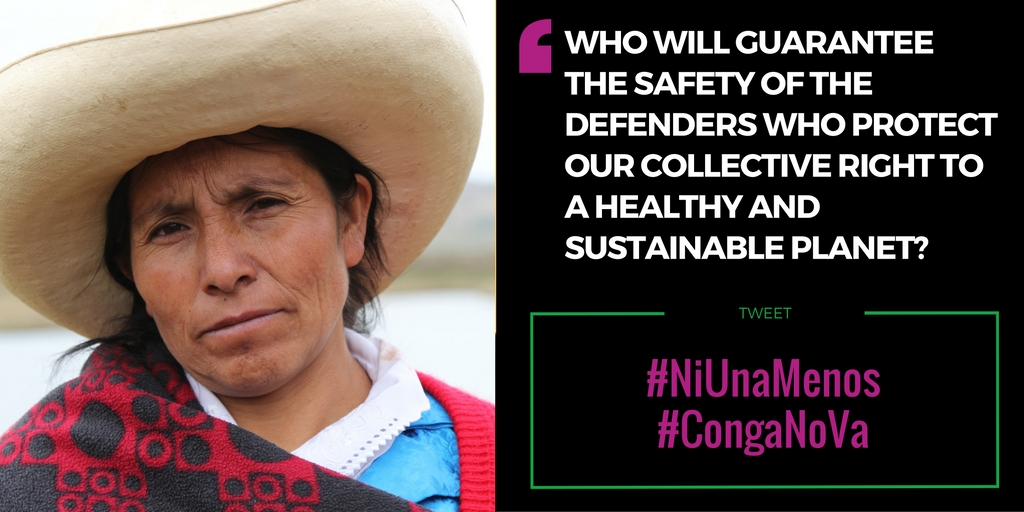 The latest on Press Release, WHRD

Hundreds rally at the UN to demand justice for Berta Cáceres