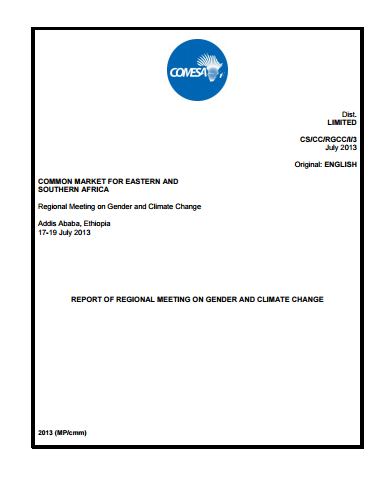 ADDIS, ABABA (August 23, 2013) — In further efforts to support the advancement of women’s empowerment and gender-sensitive climate policy, in June 2013, WEDO was invited to join a Regional Meeting on Gender and Climate Change, spearheaded by the Common Market for Eastern and Southern Africa (COMESA).

This meeting brought together policy makers, gender practitioners and negotiators to discuss the status of gender and climate change in Africa with a view to identifying options and ways of advancing the goal of gender balance in the UNFCCC and informing gender-sensitive climate policy from Africa’s perspective. The meeting included delegates and representatives of around 10 African countries, including countries participating in WEDO’s Women Delegates Fund program.

During the meeting, WEDO’s Bridget Burns in partnership with WEDO’s Ghana-based partner Rose Mensah-Kutin of ABANTU for Development, supported capacity building on gender and climate change as well as gender balance in the negotiations. Issues covered included: key concepts and issues in terms of work on gender equality within the field of climate change, the main links between climate impacts and the potential exacerbation of gender inequalities due to environmental degradation, the history of gender language and text in the UNFCCC negotiations and current data on women’s participation on UNFCCC national delegations and on boards and bodies under the Convention. In addition, WEDO’s presentations highlighted specific work being done at the international and national level to develop tools, knowledge, research and strategies for implementing gender-sensitive climate policy along with sharing experiences of WEDO’s administration of the Women Delegates Fund (WDF) and lessons learned for strategies to enhance and strengthen women’s participation in climate decision-making processes.

More information on Gender Equality in the UNFCCC
The linkages between gender equality and climate change have gained increasing significance in the UNFCCC policy-making process. This was underlined at 2012 COP18 in Doha, when Parties invested time and space to engage in a critical dialogue on gender equality, and ultimately, found consensus on Decision 23/CP.18 “Promoting gender balance and improving the participation of women in UNFCCC negotiations and in the representation of Parties in bodies established pursuant to the Convention or the Kyoto Protocol”. This decision seeks to go further than an earlier decision at COP7 in Marrakesh, recognizing that to be fully effective, enhanced capacity building and innovative actions are needed for transformation in representation.

Parties’ recognition of the importance of gender balance has already helped to increase women’s participation at all levels in this process with women’s participation on national delegations reaching an all-time high of 33% in 2012. However, as reported in WEDO’s recent analysis of women’s participation in the process from 2008-2012 women continue to be underrepresented in many delegations, particularly with respect to higher levels of leadership positions in the negotiations, and, in countries most vulnerable to climate impacts. In addition, though references to women and gender now cut across all aspects of the UNFCCC decisions- from finance and technology to capacity building and adaptation– these commitments must be turned into action.

Spotlight on Gender in NDCs
pdf | 724.20 KB
Engagement of Women and Gender-related Groups in the Climate Investment Funds: An Assessment
pdf | 979.72 KB