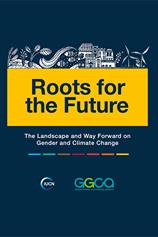 Roots for the Future: Gender and Climate Change (2015)

Over the last decade, tremendous progress has been made by the global community in recognizing the differentiated causes and impacts of climate change and considering proactive, effective, inclusive, gender-responsive solutions. Roots for the Future: the Landscape and Way Forward on Gender and Climate Change presents the latest research, data, strategies, and results on gender and climate change policymaking and programming.

Produced by the Global Gender Office of the International Union for the Conservation of Nature (IUCN) under the auspices of the Global Gender and Climate Alliance (GGCA), and in collaboration with a wide range of authors and reviewers, including members and allies of the GGCA, Roots for the Future provides an expansive look across the sectors most critically linked to gender and climate change and proposes key recommendations for the way forward. It features case studies from GGCA members’ work, as well as other best practices such as those celebrated by the Momentum for Change: Women for Results initiative of the United Nations Framework Convention on Climate Change (UNFCCC).

Roots for the Future was inspired by and updates the core content of the 2008 Gender and Climate Change Training Manual, which at the time was one of the first publications of its kind and was subsequently downloaded tens of thousands of times and used in hundreds of trainings. Not a training manual, per se, Roots for the Future still provides an array of simple, step-by-step guidance on gender mainstreaming and gender-responsive approaches to climate change decision-making, planning and projects at all levels.

WEDO’s Bridget Burns and Eleanor Blomstrom authored Chapter 2 on the Global Policy landscape. The key messages from this chapter includes: