Setting an Agenda for Our Future- UNFCCC Climate Negotiations

The WEDO team arrived in Bangkok on Saturday, April 2nd for the start of UNFCCC workshops on April 3rd and 4th. The workshops provided an interactive dialogue on mitigation actions by developed and developing countries, as well as space to begin to define the parameters of the technology mechanism. They were viewed by most Parties as positive in terms of assessing where we are in reaching the 2 degree goal. You can find all presentations from the workshops here:  http://unfccc.int/conference_programme/items/5884.php

While the technology mechanism workshop continued the morning of April 5th, the afternoon  began with the opening plenaries for the Kyoto Protocol (KP) and the Long-term Cooperative Action (LCA).  The opening session on LCA did not conclude until around 10pm on Friday night, April 8th, as Parties sat divided on what the agenda for the year should be- one focused on implementation of decisions taken in Cancun (mainly developed countries) and/or one which follows the priorities of the Bali Action Plan (priority of developing countries- proposed by G77&China). In the end, Parties came together on an agenda which aims to include both, however, many expressed frustration over the process and the time taken to come to this consensus. As one delegate expressed, “After Cancun, we came to Bangkok expecting the best- and we got the usual.”

However, it was not unexpected to most that this first meeting would be a challenge. As Ms. Christiana Figueres, Executive Secretary of the UNFCCC stated, “The decisions we made in Cancun helped save the process-now we must save the planet.” Indeed, many of the most contentious issues were left on the table in Cancun. As trivial as a week-long negotiation over an agenda may seem- the importance behind what was being debated was anything but.

Tuesday was also the start of sessions on the Kyoto Protocol (KP)- the only legally binding international agreement on climate change, set to end in 2012. Here, another dichotomy emerged between developed and developing countries- on rules vs. commitments. Developing country Parties called for countries to be clear about their intentions to commit to a 2nd period of the KP- urging that political commitments must come before substantive negotiations on rules and mitigation mechanisms. Developed Parties insisted that they must have a clear set of rules and accounting measures before they would be able to sign onto a 2nd commitment period. As the week progressed, Parties moved towards a middle ground with developed countries attempting to respond to questions about how they defined “comparable measures” and “conditional commitments”, and certain countries were more frank and honest in their intentions to sign a 2nd commitment.

While the negotiations progressed slowly, the WEDO team stayed busy in our various roles- monitoring the negotiations, engaging with the Women and Gender Constituency, and coordinating the Women Delegates Fund. WEDO provided full coverage and reporting on the negotiations through our Twitter account @wedo_worldwide.

While LCA negotiations on the agenda took place behind closed doors the small advocacy team present at the Bangkok meeting focused on the KP discussions, networked with civil society and governments present at the meeting, attended briefings and strategized and prepared for the more substantive discussions set to begin in the June Intersessional in Bonn, Germany, understanding that the political framework of the negotiations in Bangkok will shape the negotiations up to Durban.

The Women and Gender Constituency met daily and delivered an intervention during the stocktaking session of the Kyoto Protocol- emphasizing the importance of integrating social justice, gender equality or poverty eradication into market-based mechanisms for mitigating climate change. Click here to download the full intervention. You can also watch it being delivered here (01.09.05): http://unfccc2.meta-fusion.com/kongresse/110403_AWG_Bangkok/templ/play.php?id_kongresssession=3494&theme=unfccc 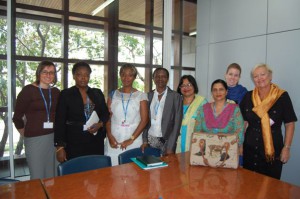 The latest on Climate Change