As we celebrate Women’s History Month, WEDO invites you to join us at the following events in New York where WEDO is either speaking or co-hosting, taking place in parallel to the annual Commission on the Status of Women at the United Nations.

*Indicates that a UN badge is required to attend. All other events open to public.
CCUN = Church Center of the UN (Corner of 44th Street and 1st Avenue) 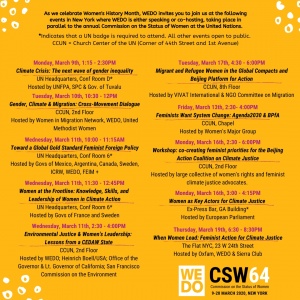 New Round of Awardees of the Gender Just Climate Solutions Scale Fund Announced at COP27
WEDO at COP27: Highlights & Resources