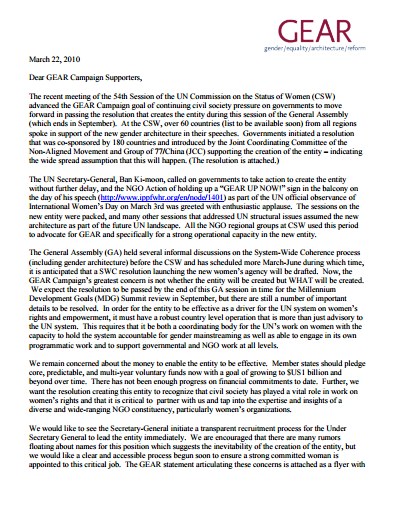 New York, March 22 — Read on for GEAR’s report on the CSW, including the resolution on the new entity, the GEAR Statement, key messages and facts about the entity from the Deputy Secretary General’s (DSG) office and a photo of the campaigners in action.

The recent meeting of the 54th Session of the UN Commission on the Status of Women (CSW) advanced the GEAR Campaign goal of continuing civil society pressure on governments to move forward in passing the resolution that creates the entity during this session of the General Assembly (which ends in September).  At the CSW, over 60 countries (list to be available soon) from all regions spoke in support of the new gender architecture in their speeches.  Governments initiated a resolution that was co-sponsored by 180 countries and introduced by the Joint Coordinating Committee of the Non-Aligned Movement and Group of 77/China (JCC) supporting the creation of the entity – indicating the wide spread assumption that this will happen. (The resolution is attached.)

The UN Secretary-General, Ban Ki-moon, called on governments to take action to create the entity without further delay, and the NGO Action of holding up a “GEAR UP NOW!” sign in the balcony on the day of his speech (http://www.ippfwhr.org/en/node/1401) as part of the UN official observance of International Women’s Day on March 3rd was greeted with enthusiastic applause.  The sessions on the new entity were packed, and many other sessions that addressed UN structural issues assumed the new architecture as part of the future UN landscape.  All the NGO regional groups at CSW used this period to advocate for GEAR and specifically for a strong operational capacity in the new entity.

The General Assembly (GA) held several informal discussions on the System-Wide Coherence process (including gender architecture) before the CSW and has scheduled more March-June during which time, it is anticipated that a SWC resolution launching the new women’s agency will be drafted.  Now, the GEAR Campaign’s greatest concern is not whether the entity will be created but WHAT will be created.  We expect the resolution to be passed by the end of this GA session in time for the Millennium Development Goals (MDG) Summit review in September, but there are still a number of important details to be resolved.  In order for the entity to be effective as a driver for the UN system on women’s rights and empowerment, it must have a robust country level operation that is more than just advisory to the UN system.  This requires that it be both a coordinating body for the UN’s work on women with the capacity to hold the system accountable for gender mainstreaming as well as able to engage in its own programmatic work and to support governmental and NGO work at all levels.

We remain concerned about the money to enable the entity to be effective.  Member states should pledge core, predictable, and multi-year voluntary funds now with a goal of growing to $US1 billion and beyond over time.  There has not been enough progress on financial commitments to date.  Further, we want the resolution creating this entity to recognize that civil society has played a vital role in work on women’s rights and that it is critical to  partner with us and tap into the expertise and insights of a diverse and wide-ranging NGO constituency, particularly women’s organizations.

We would like to see the Secretary-General initiate a transparent recruitment process for the Under Secretary General to lead the entity immediately.  We are encouraged that there are many rumors floating about names for this position which suggests the inevitability of the creation of the entity, but we would like a clear and accessible process begun soon to ensure a strong committed woman is appointed to this critical job.  The GEAR Statement articulating these concerns is attached as a flyer with talking points which we hope will be used by GEAR supporters in the coming two months to advocate for this kind of entity.

Finally, we have attached a new document from the Deputy Secretary General’s (DSG) office, “Establishment of a New Composite Entity for Gender Equality and Women’s Empowerment: Key Messages, Background and Current Status.”  This document answers many of the questions that we planned to address in a GEAR Q&A.  It is a public document that we think is very useful in clarifying many points about what the entity is intended to do.  While we agree with most of its points, it is also clear from this document why we need to continue to advocate with governments and the UN for a stronger operational presence of the entity on the ground that goes beyond what UNIFEM has now as well as for the money to make this possible and for greater civil society engagement.

In the coming weeks, we urge you to continue to advocate for a resolution that creates the women’s entity with these characteristics – using both the DSG’s paper and the attached GEAR talking points.

A pdf version of this letter/report is available here.

The latest on CSW, GEAR Campaign

Toward a Gender-Transformative Agenda for Climate and Environmental Action

Report from CSW56 Learning Circle on Gender and Climate Change (2012)