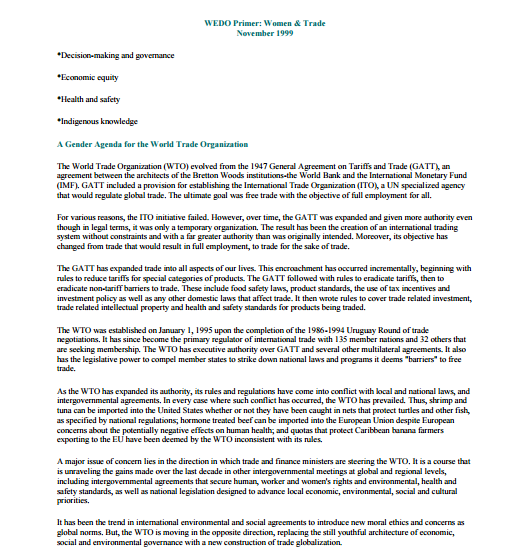 A Gender Agenda for the World Trade Organization (1999)

A WEDO Primer on Women and Trade reviewing decision-making and governance within the WTO and the harmful effects of its policies on women.

Global economic and trade policies are not “gender neutral.” Women comprise 70 percent of the world’s 1.3 billion absolute poor. Worldwide, they bear the brunt of economic and financial transition and crisis caused by market forces and globalization. Yet, women’s issues are not considered in trade liberalization policy-making and analysis. The failure of governments and intergovernmental organizations to formulate and evaluate trade policies from a gender perspective has exacerbated women’s economic inequity.

This primer describes how, in the name of trade, governments, through the WTO, are undermining the gains women have made-gains endorsed by those same governments-in governance, economic equity, health and the environment. It describes the consequences of WTO trade policies on women and their families and proposes gender-responsive approaches for change. WEDO offers this gender perspective to raise awareness and to encourage the formulation of trade policies that are more responsive to women’s needs in the ongoing trade negotiations at the WTO.

The latest on Globalization, International Finance and Trade

Intergovernmental Preparatory Meeting of the Commission on Sustainable Development: Summary of outcomes (2005)