WEDO has been collecting gender balance and women’s participation data at the United Nations Framework Convention on Climate Change (UNFCCC) since 2008. The UNFCCC negotiations are a space where women are consistently under-represented, and although some delegations have achieved gender parity, and some delegations even feature a majority of women, this is not a case of a few unbalanced delegations. WEDO recognizes the need for concerted efforts to achieve gender balance and to support pathways for women’s participation, learning, and leadership in this process. 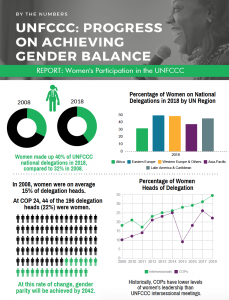 The latest on Factsheets