Landmark brief makes the case for investment in high-quality jobs in the care sectors of our economy, including childcare, residential care, and home healthcare, as part of a climate and infrastructure package

On April 15th, the Feminist Green New Deal Coalition, which WEDO is a proud member of, launched a new Issue Brief, “Care & Climate: Understanding the Policy Intersections.” The brief brings new analysis to the discourse around climate investment and infrastructure, arguing that policy design must be attentive to the role that care infrastructure must play in just economic recovery and for gender and racial justice. 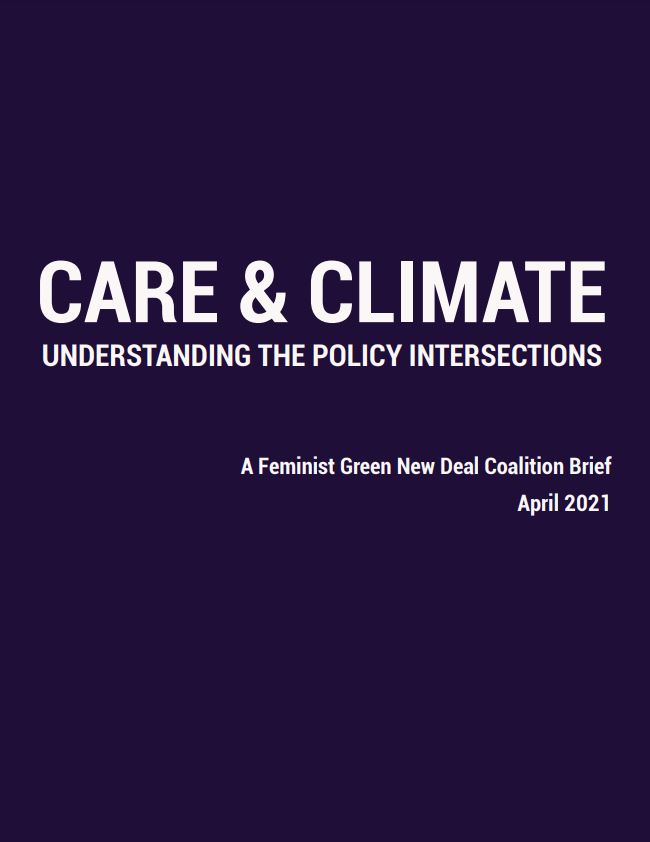 Authored by Rhiana Gunn-Wright, Director of Climate Policy at the Roosevelt Institute and one of the authors of the Green New Deal, and Lenore Palladino, Assistant Professor of Economics & Public Policy at the University of Massachusetts Amherst, the brief builds on the growing momentum around expanding and investing in national care infrastructure, from President Biden’s inclusion of elder care in his infrastructure plan to Congressman Bowman and Senator Warren’s recent release of the Care for All Agenda.

“To build the world our kids deserve, and to deal with the climate crisis we’re facing, we need a paradigm shift in how we treat care work,” said Congressman Jamaal Bowman, a champion of care infrastructure and climate justice. “We need an economy that values and prioritizes healing, not the current system of plantation capitalism that is destroying the planet and our people in order to concentrate obscene amounts of wealth in the hands of a few. Let’s treat care work as what it is — infrastructure — and invest in those jobs and workers so that we can build a truly sustainable economy.”

Included in this Issue Brief are analyses of the THRIVE Agenda and the current Biden-Harris Administration proposals for investment in care and climate resilience and a set of initial suggestions for strengthening the proposals made by the Biden-Harris Administration. In addition to more explicitly recognizing the importance of care infrastructure in a jobs plan, this brief calls for the Administration to ensure that care jobs are paid, high-quality, green jobs that contribute to climate resilience.

“We are in a moment of understanding what counts as infrastructure and further – what counts as “green jobs”, said Bridget Burns, Director of the Women’s Environment and Development Organization (WEDO). “This Brief foregrounds work that is community-centered, low-carbon, and critical to the future we need to build, where people and planet are cared for. Care jobs are green jobs just as care infrastructure is climate infrastructure.”

The latest on Climate Change, In The News