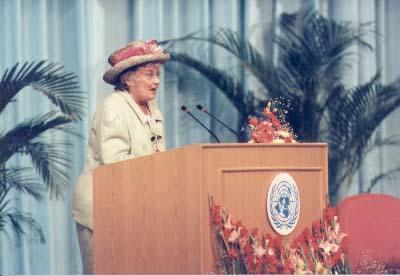 What will we accomplish at the week’s end when the Platform for Action is adopted by the world’s women and its 189 governments?

We are building a consensus to face life’s realities.  The affirmation of women’s sexual rights is an important and bold step forward. We are creating a better environment, attributing the cause of environmental degradation to unsustainable over-consumption and production and military conflict. We are affirming human rights for all women and girls, acknowledging the full range of diversity that exists and detailing actions to prevent violence. We are generating better opportunities for women who are living at the margins of life, women who are the majority of the world’s poor, hungry and illiterate.  Women who would transform the lives of themselves and their families with just a 5% slice of the military pie — that would be a banquet for the world’s 1.3 billion poor.  We are strengthening all families by supporting their economic and social needs., we are fashioning new ways to involve women at all stages of negotiation and decision-making.  From kitchen tables to peace tables women propose to turn the tables on the status quo. We are challenging all corporations to play by the rules and all governments to ensure that the rules are fair. we are moving a political, social and economic agenda for equality and democracy.  Democracy within homes, markets and the state. From Beijing, the world will never be the same.

Beijing has given birth to a global movement for democracy that as Gertrude Mongella said in her opening statement in the Great Hall of the People, is a “revolution.” — New partnerships between men and women based on real equality.

Imperfect though it may be, the Beijing Platform for Action is the strongest statement of consensus on women’s equality, empowerment and justice ever produced by governments.  The Beijing Platform is a consolidation of the previous UN conference agreements in the unique context of seeing it through women’s eyes.

It is an agenda for change, fueled by the momentum of civil society, based on a transformational vision of a better world for all.

As women, we know that we must always find ways to change the process because the present institutions want to hold on to power and keep the status quo.  Just five short years ago, we developed the Women’s Caucus methodology to influence the global agenda at the UN for the Earth Summit.  WEDO and countless other NGOs have carried this work forward, linking the gains made at each conference, trying to prevent collective amnesia by governments.

Now as we leave Beijing, women will not stop.  It’s like jet propulsion.  The fact that so many women made such an effort to participate in this historic conference is a testament to the seriousness of the agenda.  Now, women around the world own this agenda.  Women will ensure that others know about the provisions agreed to and the commitments made and millions will press their governments to follow through.

One year after the Cairo conference, the Earth Summit Watch (initiated by the National Resources Defense Council, WEDO and other NGOs) presented Nafis Sadik, the head of UNFPA with a one year progress report on how governments are doing in their implementation of the ICPD Programme of Action.  The results of the first global survey revealed that only one-third of governments bothered to reply.  But 46 of the 54 countries that did respond to the survey said that they have initiated policies and programs to implement ICPD.  Some ‘such as Japan, South Africa, Thailand, Pakistan and the UK said they increased funding for reproductive health and social services.  But serious efforts to implement the Cairo principles are sadly lacking in most countries despite ever-vigilant and diligent women’s groups and NGOs.

I raise the issue of implementation today to remind each of us of the importance of the commitments governments made here.  Sadly, only one-third actually picked up the challenge and announced actions.  Governments watered down the language to make it harder for people to track the commitments, but NGOs in the Linkage Caucus were not sidetracked.  We know that some 60 countries made commitments, covering different critical areas of concern.  A majority of commitments dealt with balancing work and family responsibilities, health and education.  Many proposed new mechanisms and targets, goals or positive action to increase women in political office. only a couple proposed actions to respond to armed conflict, a half dozen were to combat violence.  Once pledged, governments must direct sufficient resources to these initiatives.  Japan announced more resources for women in development.  The US announced a six year $1.6 billion antiviolence program.  India pledged to spend 6% of its GDP on education, up from 2.5% of GDP currently.

These examples harken a new era of action.  In March, the Linkage Caucus proposed that we focus on achieving gender justice.  Five steps were called for: implementation, integration, accountability, enforcement and resources.

We look forward to the day when each country will assemble its national action plan and develop the political will to implement the full Platform for action before 1996.

You can be sure that when this conference ends, we will still be looking at our governments –closely, critically, urgently and hopefully — to ensure that you hold to and make real the commitments entered into here.  Each,of us returns home to our countries and communities with concrete steps to take, with a road map for accountability and a comprehensive agenda for progress.

Some wonder how I have kept going for so long and how I manage to remain optimistic.  When governments were removing the brackets from the document over the last two weeks, the French tested another nuclear weapon in the Pacific, NATO was bombing Bosnia and the Serbs were shelling Sarajevo.  Refugee camps overflowed in too many places around this globe.  Conditions for women on factory floors did not change.  Women died in childbirth and in their homes.  Hunger gnawed at the bellies of millions.  The world went on, in its downward spiral we all know all too well.

In the face of so much pain, I remain an incurable optimist.  I am fueled by the passion of the women I have been privileged to meet and work with, buoyed by their hope for peace, justice and democracy.  I am strengthened by each of them.  And to each government delegate who pushed the boundaries of progress I thank you.  I thank the United Nations and my sisters in the NGO community for your good humor and hard work.  I wish each of you well and sustainable optimism for the days ahead. Never underestimate the importance of what we are doing here.  Never hesitate to tell the truth.  And never, ever give in or give up.

The latest on Beijing Platform for Action, In The News, Women Leaders