Women’s equal participation in climate change decision-making is fundamental to just policies that reflect and respond to the needs of the global community.

Women’s equal participation in climate change decision-making is fundamental to just policies that reflect and respond to the needs of the global community.

Recognizing a need to support the participation and leadership of women in the UN climate negotiations, the Women Delegates Program (WDF) aims to sponsor Party delegates, particularly from Least Developed Countries (LDCs) and Small Island Developing States (SIDS), to participate in UNFCCC convened meetings and negotiations. While recognizing that this kind of travel support cannot be used as the only means to address structural gender inequality in decision-making at the regional and national levels, it is an important equity measure to support women’s full and effective participation, which can also lead to greater awareness raising and more inclusive policy decisions.

In 2009, the Government of Finland partnered with WEDO, UNDP and IUCN to form the Global Gender and Climate Alliance (GGCA) and launch the WDF. During its history, the WDF has grown with the support of several other donors: the governments of Australia, Canada, France, Iceland, the Netherlands, Scotland, Sweden, Switzerland, and the United Kingdom. The program is administered by WEDO.

From 2009 through 2022, the WDF has supported 418 trips for 170 women across 70 countries to attend 36 sessions of the UNFCCC. Since 2012, ‘Night Schools’ have been held at the majority of these sessions, where more than 500 women have been trained in technical language and negotiations skills. Since 2017, Pacific Women Leaders have benefited from WEDO hosted and co-hosted regional specific workshops.

“Our leadership reaches more than just here… we can go back home and translate what is happening at this level to those on the ground who are being directly impacted by climate change. We can serve as role models at all levels for the importance of women’s leadership and participation.” —Sieane Abdul Baki, WDF Delegate first supported in 2009, who later became Deputy Minister of Gender in Liberia

“We talk about increasing women’s participation in decision-making, and the first step to do that should be to ensure that they are present.” – Emelda Adam, Tanzania

In tandem with travel resources, the WDF prioritizes building leadership skills through knowledge and capacity strengthening on technical issues related to the negotiations, including running mock sessions and practice in drafting interventions. 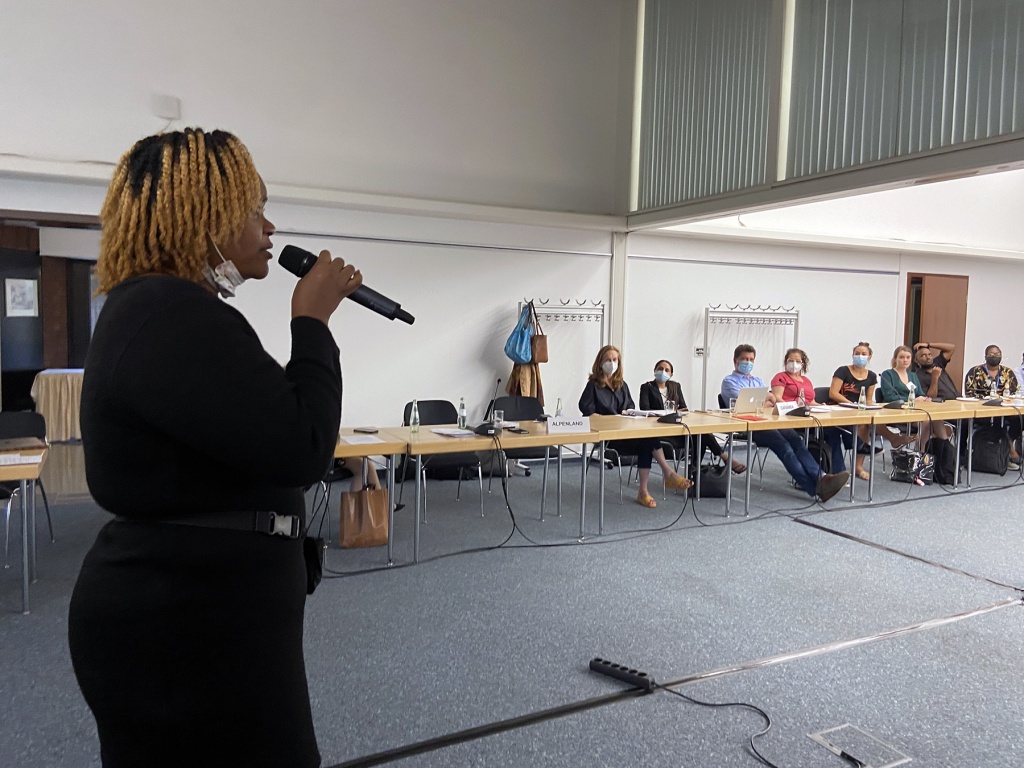 Since 2012, the WDF has worked to develop comprehensive and sustained negotiation skills modules, including the institutionalization of a “Night School” (so named so because it is held in the evenings) during key preparatory and negotiating meetings.

“In the three years I have been coming to these negotiations, I have never once raised my flag to speak. The training really helped to bolster my confidence. In Bonn, I have raised my flag three times on behalf of my country.” – Night School Participant

Since 2017, WEDO has hosted or co-hosted regional training workshops for women delegates in the Pacific (2017-2020, 2021-virtually), Asia (2017), the Caribbean (2017), and Francophone Africa (2018). These three- to four-day workshops expand on the leadership, diplomacy and negotiating skills also covered during the Night School while deepening participants’ understanding of technical issues, particularly as they pertain to their region. Additionally, participants, many of whom go on to be funded as delegates to UNFCCC sessions, cultivate deeper connections with their regional colleagues pursuing similar work.

“These workshops are building a cadre of Pacific Women negotiators, as well as ensuring our participation and inputs into the climate change negotiations and guaranteeing our informed and effective participation, not only in the immediate COP but in future UNFCCC negotiations.” – Pacific Workshop Participant

The WDF provides hybrid programming that engages delegates across multiple platforms (virtual and in-person) with emphasis on coordination within and across delegations and the ability to access modules on and practice skills as needed (e.g., drafting, negotiation, holding bilateral meetings).

A final and critical element of the WDF is advocacy, in particular by facilitating organizations and the delegates themselves to highlight the importance of innovative strategies to enhance women’s leadership. The WDF Network—hundreds strong—of women delegates who have been trained and/or funded through WDF continues to serve as a platform for connection, wider discussion on women’s leadership in decision-making, and promotion of policy change at international and national levels.

“[The WDF] creates the avenue for networking with delegates from other part of the world, understanding the role they are playing in their institutions, and what role you are also playing in your institution and your understanding about the process—what both of you can copy or learn from each other after networking. – Josephine F. Doles, Liberia

Travel Support: For supporting delegates’ travel to the UN climate negotiations (intersessionals and COPs), eligible Parties are identified through specificity of the donor, because they are LDCs, or due to historically low women’s participation. WEDO provides information about funding through Parties’ UNFCCC National Focal Points. Delegates must be part of the official government delegation and be nominated by the Focal Points; however, the WDF Coordinator may nominate candidates to the Focal Points for their consideration. Increasingly, the WDF delegates are engaging in and being called upon as experts at home, in local, national and regional processes and planning. Therefore, preference is given to delegates whose participation can be secured over a number of years. Contact tara@wedo.org with any questions about the selection process.

Night School: Any delegate is eligible to attend a WDF Night School, usually hosted on the Friday and Saturday evenings preceding an intersessional or COP. Invitations are distributed to the UNFCCC focal points for each Party as well as through the listserv of the WDF Network. Contact tara@wedo.org to be added to a notification of Night School sessions.

Advocacy and Networking: Any delegate is welcome to join the WDF Listserv, where opportunities such as training events are shared. Contact tara@wedo.org to be added to the listserv. 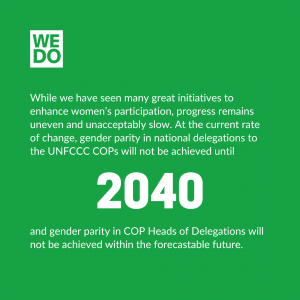 Since 2008, as a part of ongoing efforts to enhance women’s voice and leadership in climate change policymaking, WEDO has tracked the participation of women delegates on national delegations to the UNFCCC—across countries, regions and as
Heads of Delegations. We have documented and shared these statistics on the Gender Climate Tracker website and mobile app, and produce regular briefs on the status of these figures.

Read the latest report on women’s participation in the UNFCCC.

During the time the WDF has been operating, support for the basic foundation of women’s participation has increased. In 2017, our efforts, alongside strong advocacy from the Women and Gender Constituency, contributed to the adoption of the first UNFCCC Gender Action Plan (GAP). This initial GAP, as well as the enhanced Lima Work Programme on Gender and its GAP adopted in 2019, demonstrate both the recognition and integration of the principles and impact of the WDF. Priority Area B in the GAP (2020-2024) highlights two goals to which the WDF contributes:

B.1 Promote initiatives for capacity-building in leadership, negotiation and facilitation of negotiation for women delegates, including through webinars and in-session training to enhance women’s participation in the UNFCCC process

B.2 Promote travel funds as a means of supporting the equal participation of women in all national delegations at UNFCCC sessions, as well as funds to support the participation of grass-roots local and indigenous peoples’ communities from developing countries, the least developed countries and small island developing States and encourage Parties and relevant organizations to share information on travel funding

“The WDF makes us ambassadors for women across all areas of the negotiations. Other countries now want to increase the women on their delegations and even just by being in the room, we are helping to ensure that gender remains in the language of the text.” – WDF Delegate, Bangladesh

The latest on Women Delegates Fund