Advocating at the UN Climate Negotiations 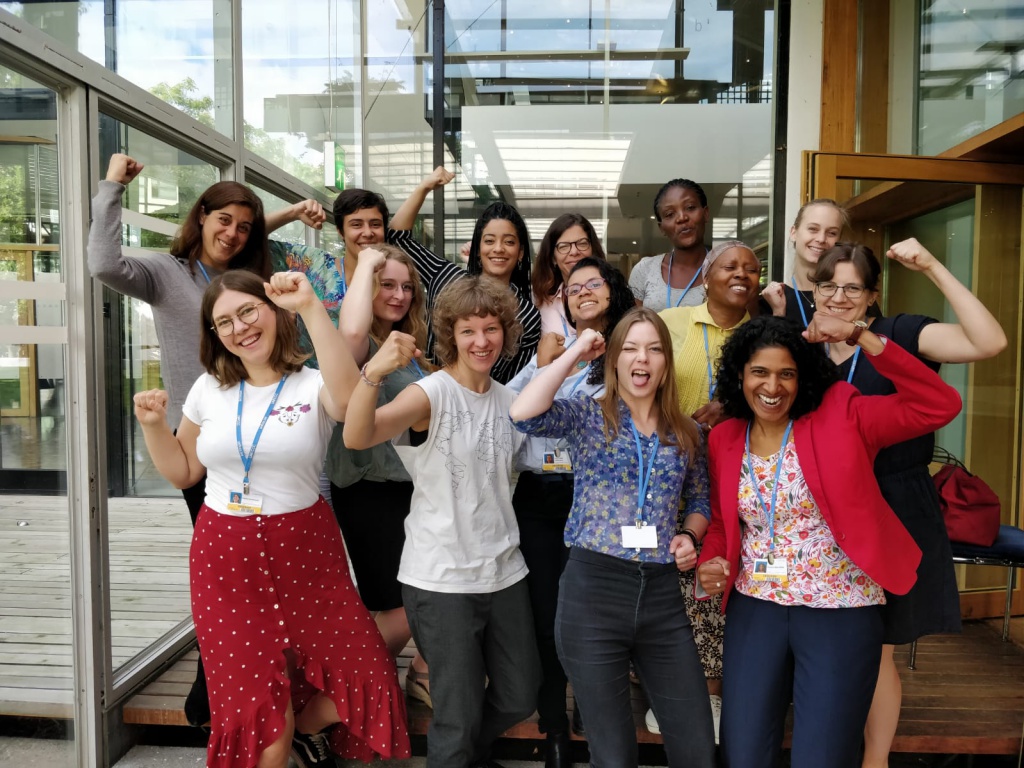 From June 17-27, WEDO was in Bonn, Germany at the United Nations Framework on Climate Change Convention (UNFCCC) Bonn Climate Change Conference (SB50) vigorously advocating for gender equity and spreading fierce feminism – as we now reflect on the two weeks while looking forward to COP 25 in Chile, we want to share the powerful feminist voices and actions which we have witnessed, and participated in, thus far in the name of climate justice. 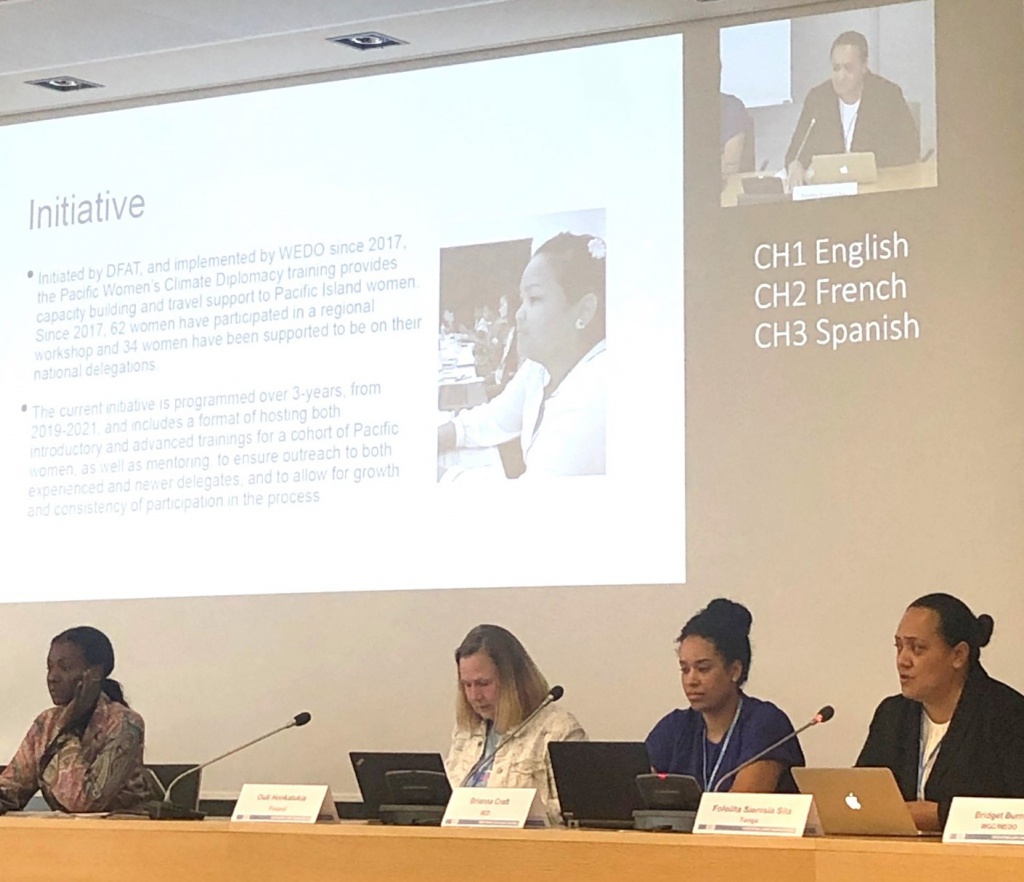 The three-day Gender Workshop at SB50, organized by the UNFCCC Secretariat, brought together dozens of delegates, NGOs and CSOs, constituencies and other conference attendees to receive key updates from countries on Gender Action Plan (GAP) implementation and to engage in workshop groups to brainstorm ways the UNFCCC can renew the GAP to be more targeted, comprehensive and resourced across all five priority areas.

Renewing the GAP this year as part of the long-term Lima Work Programme (LWP), is critical to ensuring women’s rights, human rights and gender equity in climate policy and is undeniably a key instrument in achieving the 1.5 degree goal, as expressed in the WGC’s ‘COP25: Views in the Next Phase of the Lima Work Programme and its Gender Action Plan’.  A major aim of the GAP at the conference has been to promote coherence and mainstream gender across the Convention – and the WGC, alongside many gender advocates, worked hard on-the-ground at the conference to raise these ambitions.

“We cannot do this in isolation, we need to work in solidarity,” said Fololita Sienisia Sila at the opening Gender Workshop panel. Fololita is a Pacific Island delegate from Tonga who has been supported to attend the conference for her first time through the Women Delegates Fund (WDF).

Alongside Fololita on the panel was WEDO Director Bridget Burns who presented on the latest WDF trainings, highlighting the May 2019 Pacific Climate Negotiator Training in Nadi, Fiji and the Negotiations Skills and Technical Language Training, aka Night School, that WEDO facilitated in Bonn earlier this week. She also shared insights on other strategic capacity-building and knowledge sharing initiatives that have proven to be a success, including fundamental contributions of women-led climate solutions as a result of the Gender Just Climate Solutions Awards.

Correspondingly during the panel, the key activities of civil society organizations and networks that are part of the WGC were presented, highlighting many capacity-building and knowledge sharing projects that have created incredible pathways and remarkable impact, including the following:

Following the workshops, the UNFCCC Secretariat held three informal meetings on gender summarizing the results of the brainstorming sessions and opening the floor to receive further inputs from delegates, CSOs, NGOs and other parties. Additionally, WEDO hosted a side event with UNFCCC Secretariat Gender Lead Fleur Newman at the end of week two to discuss how civil societies, UN agencies and governments are working to support GAP implementation. The GAP will continue to be open for country submissions until August. 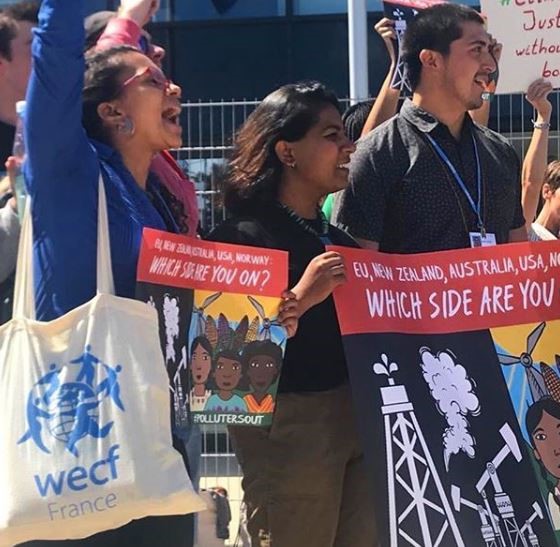 The energy and activism were high by the end of week one, and Friday’s youth strike for intergenerational justice (in tandem with the ongoing Fridays for Future strikes) undoubtedly raised the volume of all that’s been happening within the conference. “Keep it in the ground!” and “We are unstoppable, another world is possible!” were chanted by the conference’s participating youth, who were joined by locals for an electrifying hour of climate justice solidarity in front of Bonn’s World Conference Center.

In parallel, climate activists in Germany executed a major action this week as part of the Ende Gelände climate justice movement to phase out from the use of coal by 2038 – people gathered to block German coal infrastructure with their bodies in bold efforts to raise awareness that the country’s coal compromise is not ambitious enough. Members of the Women and Gender Constituency (WGC) joined the Fridays for Future strike and later live-streamed the Ende Gelände coal civil disobedience action at our exhibit booth for conference participants to view and experience.

The need for enhanced gender implementation was brought to several Subsidiary Body meetings and sessions as well. Members of the WGC voiced concerns and a critical urgency on ongoing energy, water, agriculture and adaptation issues being faced by Women Human Rights Defenders and indigenous women and children in the Global South.

At the plenary session on day one, Gina Cortés of Women Engage for a Common Future delivered an intervention on behalf of the WGC urging Parties to prioritize and better incorporate gender-responsive climate change solutions:

“The world has changed since COP24. We see fierce female youth leaders leading the students’ strikes weekly and they can count on our full solidarity – Can they count on yours?” she asked. “To ensure environmental integrity, a strong & supportive governance framework should provide clear guidance on sustainability indicators, ensuring human rights & gender equality as well as enabling space for complaints of violating any of these principles. The Paris Agreement calls for climate action with intergenerational equity. Parties have missed to mainstream this principle in Katowice but you can raise ambition now.”

On Day 2 at the Koronivia Joint Work on Agriculture workshop, WGC co-focal point Ndivile Mokoena expressed the need for gender-responsive policies in across agriculture sectors, especially in developing countries where rural women comprise 43% of agricultural labor.

“The Koronivia Joint Work on Agriculture must strengthen gender-responsive planning and budgeting for adaptation in the agricultural sector, as well as facilitate access to sustainable technologies and funding to small farmers,” she said. “The work of the Koronivia group should always integrate the broader socio-economic and food security dimensions of climate change in the agricultural sector in this work and foster a rights-based, transformative and gender-responsive approach that is consistent with relevant existing international policy frameworks and human rights agreements.”

Later at the SBI/SBSTA closing plenary on June 27, Faustina Boakye, gender and energy expert at Free the Marginalized Women Advocates (FREMWA) in Ghana, delivered a closing statement on behalf of the constituency, reiterating the need for an enhanced Gender Action Plan:

“We are here with solutions, with the fundamental understanding that gender equality is itself a solution to the climate crisis, and yet we continue to see the voices of grassroots and indigenous women left out and underrepresented, the ideas of local communities un-funded and un-connected to larger planning processes that should be participatory, the mobilization of finance inadequate to the need, and women environmental and human rights defenders endangered for speaking against corrupt and destructive regimes of power that contribute to this catastrophe.”

Faustina finalized her statement with four key demands the WGC seeks to be met at COP 25, including rules for Article 6 that include rights-based social and environmental safeguards and an independent grievance redress mechanism, as well as more ambitious NDCs by parties based on the IPCC 1.5 degree special report. Members of the WGC will continue to urge Parties for stronger gender-implementation outcomes in the months leading to COP25 in Chile.

The latest on Events, UNFCCC

Update from the GCF’s 26th Board Meeting