Celebrating the Work of Betty Ford 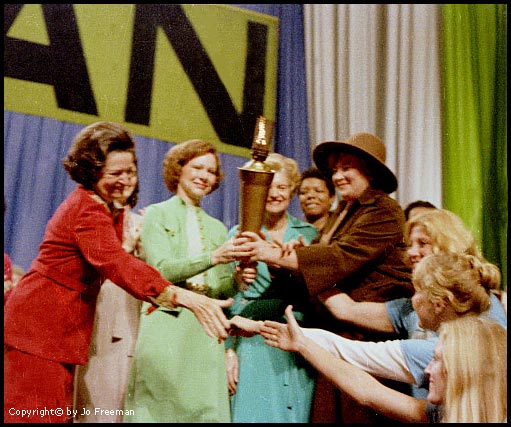 July 9th, 2011 (CNN) – (Excerpt) I will never forget the day in 1981 that I asked Betty Ford to be an honorary co-chair with Alan Alda of the Equal Rights Amendment Countdown Campaign. I thought it would be a long, involved process. But she said almost immediately that she would be honored to do so.

There was never a secret where Ford stood on women’s rights. She was outspoken in the push for full equality for women and girls. She was also for abortion rights. I first met her when she attended the International Women’s Conference in 1978 with some 20,000 delegates in Houston. Lady Bird Johnson was there, too, and then-first lady Rosalynn Carter. That was happening in a time when many Republican and Democratic women stood shoulder to shoulder together for women’s rights.

She inspired. She made a difference for millions of women. Those of us who were privileged to work with her appreciated and admired her. We will miss her.

“From November 18 to 21, 1977, over 20,000 people gathered in Houston, Texas to celebrate International Women’s Year and identify goals for women for the next decade. This was the first and only national women’s conference to be sponsored by the federal government.

A good deal of ceremony and symbolism accompanied the conference. On September 29 a torch was lighted at Seneca Falls, New York, site of the first women’s rights convention held on July 19, 1848. It was carried by a relay of runners the 2,600 miles to Houston, arriving the day before the conference began. Poet Maya Angelou wrote a new Declaration of Sentiments to parallel the one passed by the 1848 convention. The Declaration accompanied the torch on its journey where it was signed by thousands.

The next day the torch was presented to three First Ladies at the official opening of the conference, each of whom spoke about herself as a woman, not just a political wife. They signed the new Declaration and then circulated it among the delegates to sign.”