Together with World Urban Campaign, we invite you to join WEDO at a Twitter chat on gender equality and women’s human rights, from 2 to 3 pm EAT (6 – 7 am EST), Tuesday 23 January, 2018.

We look forward to your participation in #TheCityWeNeed Twitter chat! 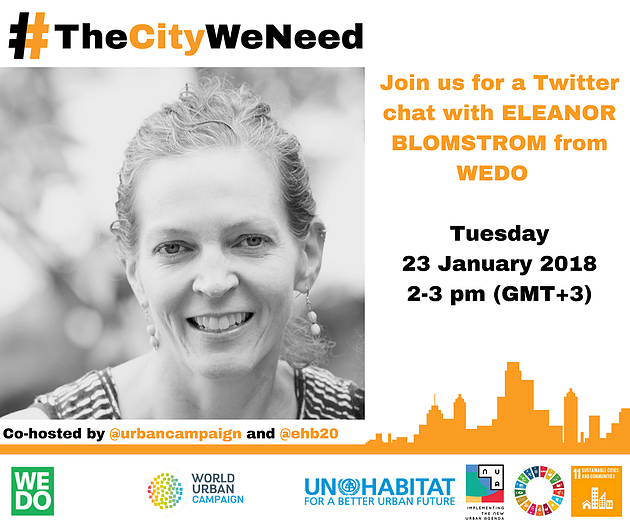 Background on Gender Equality and Women’s Human Rights in #TheCityWeNeed

There is no doubt that the world is urbanizing rapidly. And cities are often hailed as engines of economic growth and places of opportunity. However, economic growth tends to be measured by GDP, is re-invested into other growth-oriented projects and remains in the pockets of the powerful – it does not usually translate into more and better public services (education, health, transportation, housing), social protection, or decent jobs. The opportunity of cities is not equally accessible to all.

Gender inequality and discrimination against women is entrenched in all institutions, cultures and countries, and must be recognized and addressed to build #TheCityWeNeed. Women are not monolithic; they live intersectional identities, which can compound discrimination (e.g. race, ethnicity, age, gender identity, ability, migrant or refugee status). Women are also not victims; they are taking action at household, local, national and international level. Women have specific skills and knowledge and expertise they can and are applying to make change in areas of housing, transport, urban food systems, water and sanitation, redistribution of unpaid domestic and care work, budgeting and more. It’s important to make those #UrbanSolutions visible. It’s also important to track what cities and localities are doing to implement commitments on gender equality and women’s rights from the #NewUrbanAgenda, to meet all 17 of the #SDGs and to even go farther.