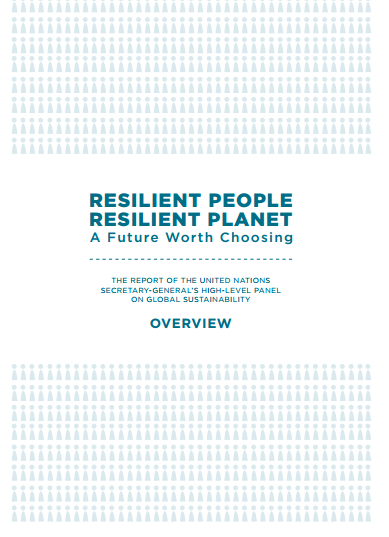 The Panel, launched on August 9th 2010, has spent the last few months conducting consultations with an array of Government, civil society and private sector experts aimed to “formulate a new vision for sustainable growth and prosperity, along with mechanisms for achieving it.” [See WEDO’s input at March 2011 GSP Interactive Panel]. Their efforts reflect the long term vision set out in the 1987 report of the United Nations World Commission on Environment and Development (WCED), entitled Our Common Future, and better known as the Brundtland Report. 25 years later, Resilient People, Resilient Planet, attempts to address why sustainable development has not become a practical reality. The report concludes with 56 recommendations which outline “concrete proposals in three key areas: empowering people to make sustainable choices, working towards a sustainable economy, and strengthening institutional governance to support sustainable development.” The Panel hopes that these recommendations can feed into the upcoming UN Conference on Sustainable Development (Rio+20), as well as other inter-governmental processes.

The report lays out the long-term vision of the Panel: “to eradicate poverty, reduce inequality and make growth inclusive and production and consumption more sustainable, while combating climate change and respecting a range of other planetary boundaries.” [pg.6] An interesting aspect of the report is a focus on “sustainable choices”, which is reflected in the title of the piece itself. The section on “Empowering people to make sustainable choices” [s. III] concludes that unsustainable choices and behaviors are often consequences of a lack of “human rights, basic needs, human security and human resilience” that preclude individuals from having “real choice”. [para55] The report states that in order to empower people to make sustainable choices, we must first and foremost deliver on the fundamentals of development: “international commitments to eradicate poverty, promote human rights and human security, and advance gender equality.” [para56a]

Another key focus of the report is creating a “new political economy” [para13], which takes into account the environmental, social and economic costs of both action and inaction, which values “environmental externalities”, and which measures growth and prosperity with a new set of sustainable development indicators that go beyond GDP.

Gender Equality in A Future Worth Choosing

A strong emphasis on gender equality and women’s empowerment can be found throughout the report. In her address to the Secretary-General, GSP co-chair President Halonen of Finland, particularly stressed the importance of placing people, and women, at the centre of achieving sustainable development. “Eradication of poverty and improving equity must remain priorities for the world community,” noted President Halonen. “The Panel has concluded that empowering women and ensuring a greater role for them in the economy is critical for sustainable development.”

The report has a total of 77 references to women and 31 to gender. Advancing gender equality is recognized as a fundamental prerequisite for development. Women’s leadership and economic empowerment is mentioned in relation to advancing women’s decision-making and political participation, breaking down barriers to women’s rights in terms of land ownership and inheritance, improved access to family planning and reproductive health services, and a shift in social behaviors among men and women towards greater equality.[para66a,b,c] The report also recognizes women’s important role as small farmers in developing a gender-sensitive sustainable agricultural revolution. [para107]

Much work is still to come to analyze this report and its potential entry-points into the Rio+20 negotiations. WEDO welcomes your inputs and comments.

The latest on Rio+20, Sustainable Development