In 2000, WEDO launched a campaign calling for “50/50 by 2005” challenging governments to take action to increase women’s political participation. Fast-forward sixteen years to 2016 and women are in line for, arguably, two of the world’s most important jobs: President of the United States of America and Secretary-General of the United Nations. Pop stars and celebrities alike proudly wear the feminist badge, and male allies can purchase a literal HeForShe badge on Amazon. Despite the resurgence of feminism in pop culture and significant progress since 2000, the reality is that we are far from shattering the glass ceiling and achieving a 50/50 world.

Women’s global political participation and leadership have improved at an alarmingly slow rate. As of June 2016, women still account for only 22.7% of the world’s parliamentarians and one-in-ten of world leaders. Women continue to face barriers and biases in the workplace, which present subtle, but insidious obstacles to women’s leadership. The leadership gap further widens when examining race/ethnicity and the experiences of women of color. Women of color make up approximately 18% of the entire U.S. population, but just 5% of U.S. state legislation.

While there is progress, women are still not at the table, and when critical decision are made—about security, environment, justice, labor and more—half the population is left out.

Women are particularly underrepresented in senior-level leadership positions across regions and fields. WEDO has been tracking women’s participation rates in the United Nations Framework Convention on Climate Change, the key decision-making body to prevent global warming, for ten years. In 2015, women made up, on average, 38% of UNFCCC national delegations, but only 24% of Heads of Delegations. At the current rate of change, it will take until 2040 to reach gender balance, which is far too late for the future of our planet and people.

Recently, there was a lot of noise about women’s leadership in the climate negotiations as two women were appointed to lead the negotiations on the implementation of the Paris agreement, in addition to a new female Executive Secretary, Patricia Espinosa, the successor of now UN Secretary General nominee, Christiana Figueres. Many questioned whether this was an important sign of enhanced gender equality and climate action (See: ‘With women at the top, UN climate body has chance for real change‘)

But as WEDO’s Bridget Burns shared: “Being able to visually see representation changing is an important part of transformation but the challenge can be if that overshadows large structural inequalities. If that is pointed to solely as progress that  becomes problematic.” She also highlighted the continued disparities that existed in women’s leadership from developing countries and in sectors such as energy and finance.

In a world ravaged by countless, intersecting crises, injustices, and inequalities, we need champions of women’s human rights and all human rights. In the past year, we have witnessed the shrinking space for civil society, the infringement of corporate greed on the rights of people and the death of human rights defenders who dare to challenge an unjust system.

In the words of Audre Lorde, “There is no thing as a single-issue struggle because we do not live single-issue lives.”

It is critical that we keep fighting for women’s full and equal participation, as a basic tenant of women’s human rights. We cannot continue to wait decades for a 50/50 world, and initiatives which work to increase women’s leadership in politics via training and campaign skills, or in diverse sectors such as science, technology, engineering, and math- should be applauded. As highlighted above, WEDO’s own Women Delegates Fund is a program aimed at changing the representation of women leaders in the climate negotiations.

But in additional to ensuring women’s full and equal participation, we must also push for intersectional feminist leadership. Leaders who can demonstrate a capacity to address the global structures, systems and values that undermine gender equality, women’s human rights around the world and that stand in the way of transformative development justice.

Must women collectively triumph at any and all female role models in leadership? Implicit in this question is the presumption there is one monolithic experience of being a woman. Gender, alone, does not define identity, at least not mine. It is one factor in a complex medley of others including race, class, disability status, sexual orientation, and age that profoundly shapes a woman’s experiences. Therefore, to suggest that there’s a special place in hell for women who do not help other women seems, ironically, unfeminist. We must all strive for critical analysis of the type of leadership that can truly challenge the inequalities in our world.

As Bella Abzug once put it “Women have been and are prejudiced, narrowminded, reactionary, even violent. Some women. They, of course, have a right to vote and a right to run for office. I will defend that right, but I will not support them or vote for them.”

It is critical that we recognize in all our work, we are fighting all forms of oppression, both those imposed through structural inequalities that oppress based on race, gender, ethnicity, economic status, age and sexuality and those which uphold global inequalities between north and south, vast concentrations of wealth, corporate power and control and the destruction of our planet.

One can both celebrate and advocate for women’s leadership and political participation, challenge inherent double standards, and expect female (and male) candidates to advance a “bold, comprehensive women’s human rights agenda that recognize the indivisibility and universality of women’s human rights”. In other words, we want a woman, but we also want a feminist (a term in itself which must be constantly interrogated to ensure it is not reproducing oppression in its deployment).

In line with this thinking, the Women’s Major Group is calling for the next secretary-general to bring a strong feminist perspective to the UN, in line with the UN’s core values of human rights, equality, and justice.

As stated in a 2016 change.org petition: After the appointment of eight male Secretaries-General, a female Secretary-General is urgently needed to foster gender equality in the leadership of the UN. Beyond ensuring that the next UN Secretary-General is a woman, we believe that the successful candidate must be a woman who brings a strong feminist perspective to the UN, in line with the UN’s core values of human rights, equality, and justice.

We, therefore, call for a woman Secretary-General who has a demonstrable commitment to: 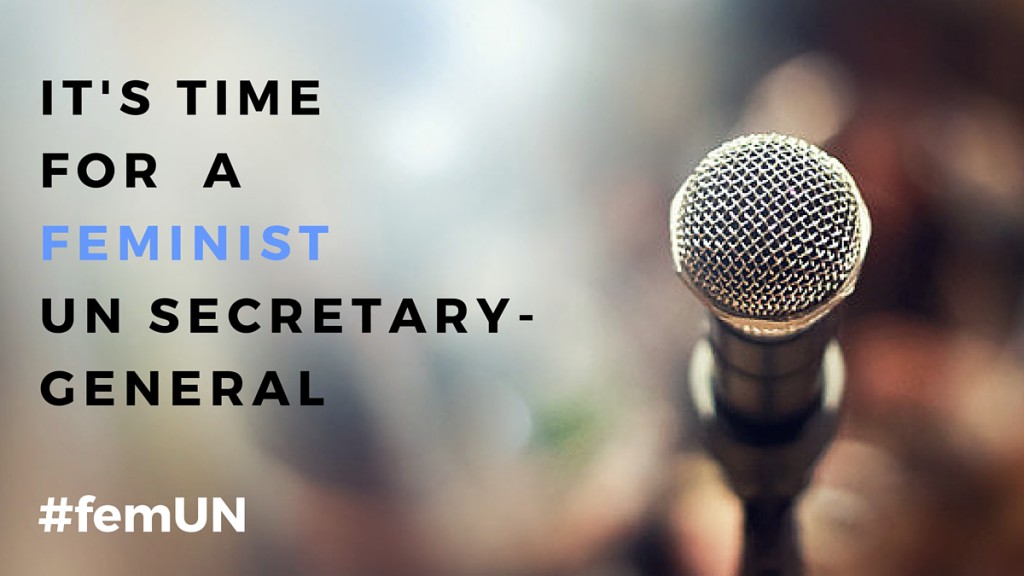 Add you name to the petition for #femUN

Article: Still no country for women? Double standards in choosing the next UN Secretary-General
Report: The Women's Leadership Gap