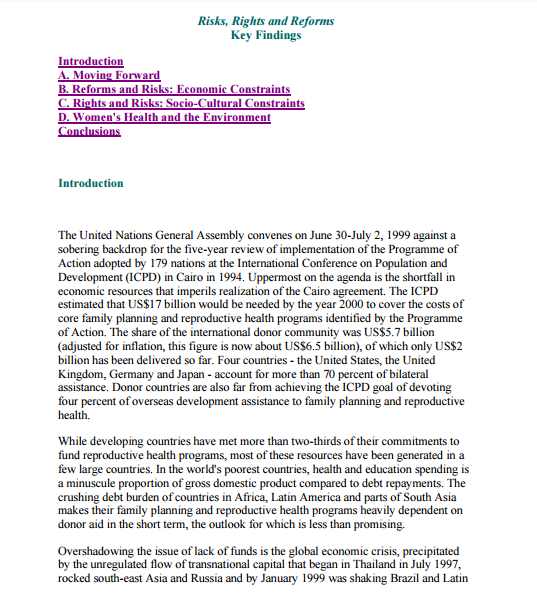 A 50-Country Survey Assessing Government Actions Five Years After the International Conference on Population and Development.

The United Nations General Assembly convenes on June 30-July 2, 1999 against a sobering backdrop for the five-year review of implementation of the Programme of Action adopted by 179 nations at the International Conference on Population and Development (ICPD) in Cairo in 1994.

Uppermost on the agenda is the shortfall in economic resources that imperils realization of the Cairo agreement. The ICPD estimated that US$17 billion would be needed by the year 2000 to cover the costs of core family planning and reproductive health programs identified by the Programme of Action. The share of the international donor community was US$5.7 billion (adjusted for inflation, this figure is now about US$6.5 billion), of which only US$2 billion has been delivered so far. Four countries – the United States, the United Kingdom, Germany and Japan – account for more than 70 percent of bilateral assistance. Donor countries are also far from achieving the ICPD goal of devoting four percent of overseas development assistance to family planning and reproductive health.

The latest on Sustainable Development