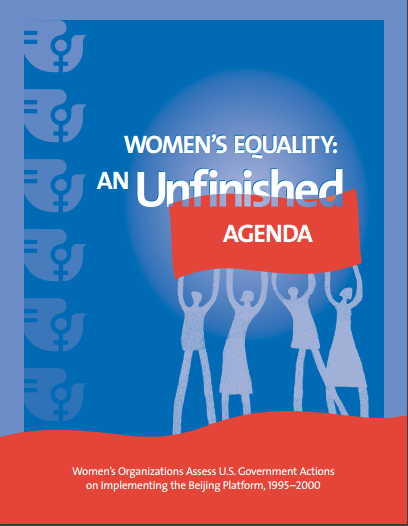 The full realization of women’s equality in the U.S. demands a comprehensive and far-reaching approach that promotes and empowers more women in decision-making in all fields.

Each of the sections in Women’s Equality: An Unfinished Agenda recognizes the significant accomplishments of the government at the national level, from actions to address domestic violence to the appointment of more women than ever before to top Cabinet, Executive, and Judicial positions. However, by highlighting the many actions still needed to bring about women’s equality, this report draws attention to a central weakness in the government’s attempts to implement the Platform for Action.

The Beijing Platform for Action marked a breakthrough in the improvement of women’s livelihoods and rights. However, even as women applaud the gains made, we point to a piecemeal and incremental approach to women’s rights that the government must address if we are ever to attain gender equality. Women’s equality requires the transformation of societal institutions in a way that promotes gender equality.

The latest on Beijing Platform for Action, US Policy