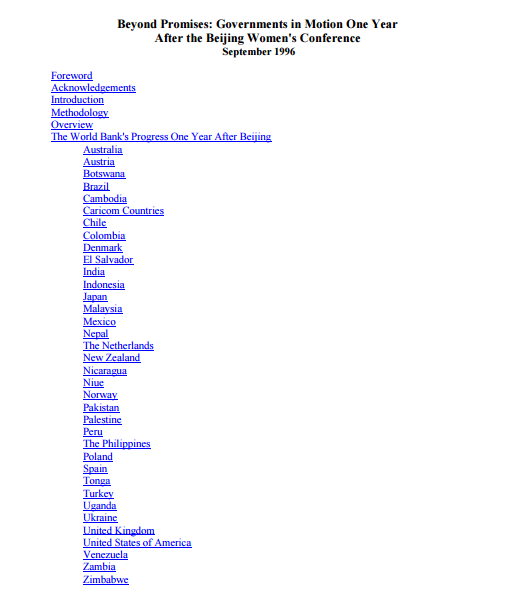 Beyond Promises: Governments in Motion One Year After Beijing (1996)

A WEDO survey report on progress made to implement the Beijing Platform for Action.

Anniversaries are good occasions to take stock. One year after the United Nations Fourth World Conference on Women, it is time for the governments which made commitments at Beijing and the thousands of women who helped shape the landmark Platform for Action to pause and reflect on what it has really meant to bring Beijing home.

For millions of activists in the global women’s movement, Beijing has become a metaphor for transformation. While imperfect, the Platform adopted by governments last year is the strongest holistic statement on equality, development and peace to come out of any gathering of the world’s nations. It is a roadmap towards a better future for all, not merely women. It calls for major transformations in human relationships as well as the ways we live, work and share the planet.

The United Nations Fourth World Conference on Women was the largest mobilization of the global women’s movement to date. Nearly every country of the world and tens of thousands of people participated in the multi-year process that culminated in Beijing in September 1995. Over 40,000 women made it to China to participate in the NGO Forum, to cover the conference for the media and to negotiate and agree upon the Platform for Action. There was significant press coverage of the conference — the personalities, the conflicts and, to some degree, the issues.

Now, on the first anniversary, the world wants to know what has happened since Beijing. We assume that government representatives are also curious about what has transpired in other countries and how it compares to activities in their own. The Women’s Environment & Development Organization (WEDO) has prepared this one-year anniversary report, building on our six-months preliminary post-Beijing monitoring report, First Steps, to respond to this need.